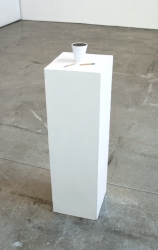 Setting: a local urban coffee shop with a dumb name like "Bean Supreme"or "CAFEinated". Outside of the store is a sandwich board sign with a badly drawn image of a smiling coffee bean, the bean is saying that the special today is "big coffee". The inside of the store is small but seems friendly enough. A greasy chalkboard sign lists menu items in a crude handwriting. Most of the chairs are metal and have no backs, a lone comfy looking couch hangs around in the corner. On a regular day customers and employees alike rush to and fro around the room eager to start their day while some lone workers sip quietly while typing on their laptops.

Employee: Patient and yielding but only to a certain degree, surely every customer is a new challenge meant to test his faith, he will persevere silently through these indignations but at what cost?

Creamadonna: A figment of the employee's imagination, a calming presence and restful oasis from the chaos of ordinary life.

The time is early morning.

A yawn escapes from the employee's mouth inadvertently as he cleans the counter-top. He looks out the window and appreciates the sunlight.

E: What a beautiful day! He says to himself quietly.

Tom Friedman immediately enters the store in what seems like a busy rush, the door swings on its hinges and slams against the wall loudly before slowly closing. Tom heads to the front register, he looks around the store before talking to the employee.

TF: What kind do you have?

E: We have many different selections as you can see from...

TF: Tell me all of them.

E: We've got like 3 different sizes, no wait its about 5 different sizes about yeaay big (he motions with his hands) for containers of the liquid. Coffee is sorta like this beanjuice thing its pretty good in my opinion, we sorta put hot water inside that machine thingamajig right there and coffee sorta just squeezes out sometimes. All of the coffee things are basically all coffee in spirit and equal :) (except frappucinos and smoothies which are the devil's temptation). All the coffees just have different ratios of strength/power levels and superfluous ingredients such as milk, sugar, foam, cocoa, coffee beans, etc. So just take this card.

The employee holds out a card.

Tom takes the card and looks at it.

E: You're holding it upside down.

E: Yes. So basically you take this card and draw on the percentage amount of each specific ingredient you want in your coffee. It should sorta look like a pie graph. Here's an example I just happen to have of someone else's order. It was a pretty great order if I do say so myself, its gonna be hard for you to top that order. The employee chuckles softly.

Tom looks closely at the card, the drawings of the lines on the cup are very meticulous, his eyes roll back in his head overstimulated by the small notes, it says: 70% water heated to 200 F, 17% finely ground and roasted local coffee beans, 2% sugar, 1% cinnamon, 1% splenda, 5% of 2% milk, .5% peppermint extract, .5% hickory smoke, 2% purified honey, 1% chia seeds. Each section is denoted by a slightly different pattern of gentle shading and crosshatching.

TF: It seems a bit superfluous without a key...

The employee looks at Tom suspiciously.

E: Don't copy that you're not allowed to.

The employee swiftly takes the card away from Tom's grasping hands. Tom for a small moment is seemingly stuck pantomiming the action of holding the card before recognizing its rude disappearance.

E: You know what they say about coffee.

E: No two are alike.

Tom thinks to himself that this is to confusing, clearly there is much more to the world of coffee then he previously had thought, hmm but on the other hand a new uncomfortable experience could be the perfect opportunity for personal growth, a healthy jolt to the system. He thinks and decisively shakes his head, Nah I'll just order the special.

TF: Umm, can I just get the "big coffee" special then?

E: Oh sure its a great special, the employee hands Tom yet another card that is slightly bigger than the last.

E: Are you ready to order?

TF: Do you have a pencil or something I could use to write down my order?

The employee makes no attempt to look around the store for a pencil, pen, piece of chalk, or even a marker, he shrugs.

E: Sorry we're not a stationary store so we don't just magically have pencils, you'll have to provide the pencils yourself and then we provide the coffee.

TF: Ok. (his feelings are visibly hurt by the employees critical words.)

Tom checks his jacket, shirt, and pants pockets he finds some interesting junk but its not worth mentioning and is not a pencil. Tom starts to concentrate very hard. He starts to mutter a mantra.

Tom imagines the weight and physicality of his last pencil, a sturdy Ticonderoga with a well worn spirit, it broke in half accidentally one day when he sat down with it in his back packet. After a short small funeral to rest both of their spirits Tom vowed to always hold its memory in his heart of hearts. Tom invokes this pencil's memory now in his time of need. The lights blink on and off and a microcosmic shift in weight occurs as invisible matter is transported on Tom's being which slowly apparates the pencil into reality. He feels the gentle outline of it in his pocket and is pleased as if an old friend was visiting again, their time apart made sweeter as if they were never separate.

Tom holds the pencil in his hand, in big capital letters he writes "BIG COFFEE" on the card and hands it to the employee.

The employee looks disappointed, maybe even a little hurt. He takes the card.

E: Your BIG COFFEE will be ready soon, give me a sec.

The employee turns his back on Tom Friedman to make the coffee, working the machines.

Tom is left by himself, he fiddles around with the various foodstuffs on the counter and ultimately decides to take a seat on a uncomfortable flat metal chair. He looks at the other customer in the store, a lady reading a book with a picture of the earth on the cover while calmly sipping a fancy looking coffee and munching on pumpkin bread.

TF: Ughh that looks good I should've ordered that.

Tom thinks of his many past misadventures in various food based stores and cringes, things were really up in the air during that time.

TF: (silently to himself) Things are different now, that was the past.

The employee steps behind Tom.

The employee places a small styrofoam cup on the table, filled to the brim with coffee.

TF: I thought it would be bigger...

The employee starts to move their foot in anticipation of leaving.

TF: Wait, comparative to what?

TF: Hold that thought I have to use the bathroom.

Tom leaves the disgruntled employee and heads to the bathroom. The bathroom is small and cramped but serviceable, there is a framed picture of a group of cheerful people drinking coffee across from the toilet.

Tom promptly does his business.

He moves toward the sink and starts to wash his hands but pauses in thought.

Placed haphazardly along the the sink's counter-top are a variety of sweet smelling multicolored soaps, shaped in a quirky nautical theme. Pastel starfish, seashells, and fish lay dejectedly some half used. Tom picks up a seashell shaped soap and stares at its textural pattern in awe momentarily lost in its dizzying wonder. He rubs the soap on his chest enveloped by its scent. Strands of hair stick to the soap, Tom places it back on the sink and finishes washing his hands. Before he leaves Tom pockets a few soaps for later use.

Tom heads back to his seat, the employee still stands there expectantly.

The employee leaves and heads backs to the register.

Tom is left with the cup of coffee. He presses his hand against it, the cup is comfortingly warm to the touch, insulated by the stryofoam. He starts to drink, Tom extends his long fleshy tongue, curling the sides upwards and slurping down the coffee as if it he were using a straw. He soon finishes, lapping the bottom of the cup to get all the bean juice.

TF: That was good.